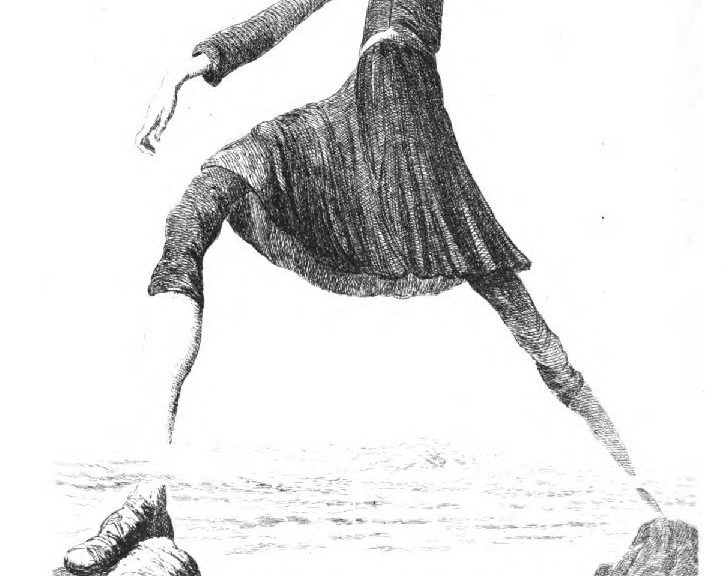 The Giants of the Blue Remembered Hills of Shropshire…

Ever since my small days I particularly liked folklore and legends concerning giants: wicked, kind, silly or funny giants they were all the same to me. Amongst my favourites were Jack’s adversary of ‘fee fi foe fum’ fame who fell down the bean stalk and Oscar Wilde’s ‘Selfish Giant’ whose heart was melted by a gentle child.

Later I discovered there were older, more dangerous giants, movers and shapers who tore up mountains and cleaved chasms, shaping land and water. These giants were the stuff of legends….

‘When he peeped out in the lightening-flashes, he saw that across the valley the stone-giants were out, and were hurling rocks at one other for a game, and catching them, and tossing them down into the darkness where they smashed into the trees far below, or splintered into bits with a bang… They could hear the giants guffawing and shouting all over the mountainsides.’

According to Geoffrey of Monmouth, Brutus arrived in a Britain inhabited by giants. The Britons were harassed by the giant Gogmagog and his kin for many years until Corineus threw him into the sea off Cornwall.

The Saxons knew all about giants and wrote them into their poetry and tales of heroic sagas. They were use to building with wood not stone and were awed by the crumbling ruins of they found. One poem likens the ruins to the work of giants: Wraetlic is pes wealstan, wyrde gebraecon; burston brosnad enta geweorc.

‘This masonry is wondrous; fates broke it
courtyard pavements were smashed; the work of giants is decaying.
Roofs are fallen, ruinous towers,
the frosty gate with frost on cement is ravaged,
chipped roofs are torn, fallen,
undermined by old age. The grasp of the earth possesses
the mighty builders, perished and fallen,
the hard grasp of earth, until a hundred generations
of people have departed.‘

Giants are remembered in folklore from all over the world and especially in Britain where they have shaped our landscape as well as stories. One tells how the Giants Causeway in Ireland was made by the great Finn MacCool, another how Wade built his giant wife Bel a causeway over Yorkshire moors so she wouldn’t have to trudge through the mud and mire to milk her cow. As she trundled along Bel would carry lose rocks in her apron which she would sometimes drop explaining the many cairns and piles of stones found on the moors.

Gawain’s Green Knight, the monstrous Grendel and Bolster of Bolster Bank in Cornwall are all familiar in storytelling and other genres but what of Shropshire’s giants ?

A Battle of Giants amongst the Blue Remembered Hills….?

The Clee Hills of Shropshire include Titterstone Clee, known to the locals as simply Clee Hill. Its distinct shape can be seen for miles and has been referenced as a landmark for centuries. It even features on the Mappa Mundi.

These hills had some notoriety long before they were immortalized by Housman when he wrote of their being ‘blue’ and ‘remembered‘. Dig deep into local folklore and you will find rumours of a Battle of Giants taking place up on the summit of Titterstone Clee as recorded by the Shropshire folklorist Miss Charlotte Burne and by Augustus Hare.

‘The stones scattered about here are looked upon as relics of a battle of the giants, and the Giants Chair is pointed out here, as the Devils Chair on the Stiperstones’.

There is little evidence of any battle upon the slopes of the opposite hill, Brown Clee but there lies here a large monolith known as the Giants Shaft said to be the shaft of an arrow once fired by a giant.

Engineers of the Landscape

Giants are often held responsible for the shape and contours of our landscape: causeways, ravines, hills, rivers. One such hill in Shropshire is the Wrekin, once a home to the long forgotten tribe the Cornovii. (one of my earliest memories is mum telling me that I was born on a hill called the Wrekin. I confess I remember feeling a bit special!)

The Wrekin came about as a result of a failed attempt by a giant (some say it was Gwendol-Wrekin ap Shenkin ap Mynyddmawr) to destroy the town of Shrewsbury.

Long ago the countryside around Shrewsbury was plagued by a particularly vile giant. He would catch unsuspecting locals and travellers and then eat them! One day a young girl fell victim but she managed to escape and warn the town. The giant was so furious he set off towards Shrewsbury with a huge pile of earth upon his giant shovel to bury the little town but he got lost and couldn’t find it. On the road he met a little cobbler who he asked for directions. The clever cobbler was carrying a huge sack of old shoes and helpfully explained to the giant that Shrewsbury was still far, far away and that these were shoes he had already worn out trying to get there! In exasperation the giant dropped the earth from his shovel which became the Wrekin and the Little Wrekin. Some locals say the Ercall formed where he wiped the earth off his boot. The giant stomped off to find more earth but he fell in the Severn and was drowned…..

There are other tales about how the Wrekin came about. One tells how it’s the spoil of a trench dug by two giants to divert the River Severn. The giants quarrelled and one threw his spear creating the ‘Needles Eye’, a huge rock that looks like it has been hewn in half. A raven then pecked out the eye of the other giant and the tear from its socket formed the depression in the rock now called the Raven’s Bowl. The blind giant was buried alive by his enemy under the Ercal, the small hill next door where his moans may still be heard at night.

The handiwork of giants was later attributed to the devil (giants were said to be the spawn of demons thus it was a natural transition I guess). The Devils Chair up on the Stiperstones in the west is a similar notion to the giant’s chair upon Titterstone Clee. Giant’s Dyke became the Devil’s Dyke and Giants Bridge became Devil’s Bridge and so on.

Given that the devil is a relatively recent arrival to folktales compared to giants who have featured for millennia it suggests that much older stories may be behind his claims to fame.

And sometimes the giant may become witch.

There is a well-known tale of the old witch up at the Bronze Age stone circle at Mitchell’s Fold, also known as Medgley’s or Medgel’s Fold but there is another version.

A seventeenth century tale tells how a giant once milked his cows up there but by the turn of that century it was told how the witch, Mitchell, milked a cow so dry she disappeared, much to the wrath of its Otherworld owners. These may be two separate stories of course.

By the way, Shropshire giants are not all male: there was a female giant buried on the Welsh border on Llanymynech Hill wearing a golden necklace. It is said that years ago three brothers tried to dig up the necklace but suddenly they all dropped dead.

And there are others….

The Roman city of Viroconium at Wroxeter was once taken over by giants and at the Red Castle on Hawkstone Hill has a ‘Giants Well’ used by two giants who were later killed by Sir Lancelot.

Not far from Ludlow at the end of Wenlock Edge are two hills where two giant brothers lived. They kept their treasure in a trunk in the cellars of Stokesay castle down below and would call to each other from one hill to the next if they needed the key to open it. One day the key fell into the moat where it still remains. The giant’s trunk remains in the cellars guarded by a raven.

A Spadeful of Giants

So there we have a handful, or should I say spadeful, of Shropshire giants.

By the Victorian period giants were figures of fun and lost some of their appeal but the twentieth century saw giants taking the stage again with heroic profiles: we had gentle Hagrid the custodian of strange and wonderful beasts in J. K. Rowling’s Harry Potter series and the Ents, J. R. R. Tolkien’s beautiful crafting of a race of tree shepherds (‘ent’ comes for Old English eoten, giant or monster).

The timeline of giants is interesting: from the seriousness and strength of the medieval giant Bendigeidfran as he walks through the Irish Sea to rescue his sister Branwen and confront the king of Ireland to the silliness of later Victorian counterparts and the foolishness of the Ettins of Ettinsmore in the last century. Like other giants of Albion, our giants in Shropshire have evolved into less credible, comical beings. Could it be that the characterisation of giants partly reflects the concerns and preoccupations of the time they are created?

If this is the case then the ents are perhaps environmental representations of the challenges that face us in the twentieth and twenty-first centuries. I will certainly be keeping an eye open for them …

The Land of the Green Man, Carolyne Larrington, 2015.

2 thoughts on “There Be Giants In Them Blue Remembered Hills….”