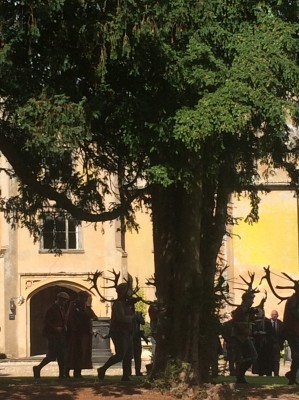 I had to force myself out of bed. Dan looked at me in horror as I
herded him out into the car in the drizzle and half light (he is not
a morning dog). It was either now or wait another year. I have wanted
to attend the Horn Dance at Abbots Bromley in the Forest of Needwood
for over 30 years. This was the day!

The horn dance has no fixed date and is always performed on the first Monday after after the first Sunday after the 4th September. Some claim that it was a originally a Christmas entertainment. Alternatively, it could be linked to celebrations held at the three day Berthelmy Fair, granted to the Abbots of Burton by Henry III in 1226. This celebrated St Bartholomew’s day, then in August, but the correction of the Julien calendar in 1752 moved the fair to the beginning of September (this must have been very
confusing!). The tradition here is for the vicar of the parish to be
in charge of the horns and they are kept in the church of St Nicholas
where they hang proudly on the wall to the left of the alter. These
‘horns’ are actually antlers from castrated reindeer, carbon
dated as 1086 C E. There is no evidence of domesticated herds of
reindeer in Britain around that time so they must have come from
Scandinavia at some point.

After driving cross country into Staffordshire leaving the hills behind and cruising the lovely Cannock Chase to wards Abbots Bromley. There was still a grey drizzle when we got to the church where we followed arriving dancers and supporters, some with steaming mugs of tea in hand. Despite the weather everyone seemed jolly and friendly and the vicar kindly let
Dan in the church despite Dan giving him a hearty greeting, for the
blessing of the horns and of the tradition (as they were both wearing
dog collars, he said!) much to Dan’s delight and my consternation,
given the muddy paw prints on his cassock.

Back outside the music began, the dancers assembled and we followed them with a few others, around the town, up and down residential area, old and new, visiting the locals and collecting donations. They move at quite a pace, suddenly stopping outside a house, someone they know, an elderly local, a mum in her dressing gown, kids off to school. At some of the bigger
houses there were light snacks and drink and a rest for the dancers –
the horns are really heavy and some pad their shoulders. The dance
goes on for twelve hours in all before the horns are returned to the
church and despite the regular rests and refreshment, it must be
really tiring!

There are twelve dancers, six carrying the antlers, Maid Marian, the
Jester, a boy with bow and arrow (to shoot at evil spirits), another
with a triangle, the Hobby Horse and the musician, now playing an
accordion but in the past, a fiddle. The dances use to wear their own
clothes until the daughter of the local vicar made them costumes in
the late 1800s and the custom continues.

The Hobby Horse was a beauty and his rider told me that by some strange coincidence it had been made in the 1970’s by his old art teacher! The original rests in the church, too old now, his dancing days are done but he gets visitors who stare and take his picture. In 1686 a Dr Plot described this
dance as a ‘Hobby Horse dance’ which was danced to raise money
for the church and the poor. The dance was revived after the Civil
War when Lord Paget returned from Turkey bringing with him six sets
of elk antlers which he gave to the village. The elk horns were used
for dancing outside the village as the reindeer antlers are not
allowed outside the parish but their whereabouts today is unknown.
Today the dancers use deer antlers for outside performances!

The Hobby Horse rider told me an old tale about how there was once another set of antlers, the same as the ones at Abbots Bromley. These antlers belonged to a rival side from Burton. One night there was a fight and the Bromley side threw them in the river Trent! This story is similar to the one about the disappearance of the elk horns which were rumoured to have been thrown into the Trent after a performance in Burton by the inebriated dancers who found them too heavy to carry home. Who knows what is lying in the depths of the Trent? 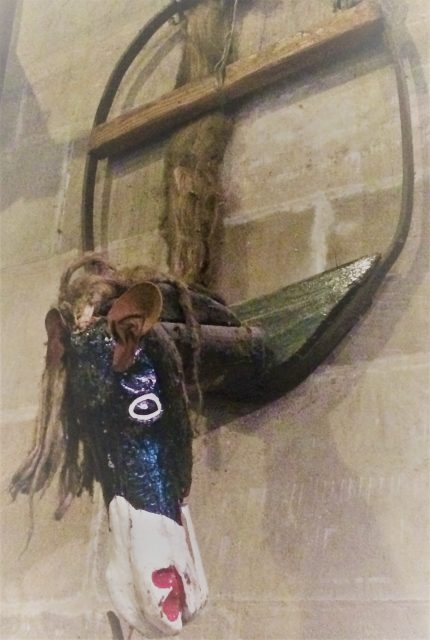 At the end of a long lane we reached Yeathall Farm where I gratefully
took a hot cup of tea. I admit I did eye the beer and mulled wine but
it was only 10am! The sun had come out and there were lovely views of
the reservoir and countryside. And so we continued, through sun,
wind and rain, past other big houses with there offers of victuals
until we got to Blithfield Hall. Now this is some distance away and
nowadays people drive to the destination giving folk the opportunity
for a brief rest and more tea or whatever you fancy! Me and Dan hot
footed it back to Abbots Bromley to get the car and have a quick look
around the stalls that were being set up in the village square.

Blithfield Hall is a private house, home of the Bagot family who have been there since the 14th century. I suspect the family have been involved in supporting the Horn Dance for some time. Lady Bagot paid for the last lot of
costumes I was told but we, the public, were not allowed over the Ha
Ha and had to wait on the other side in the park to watch the dancers
perform for the ‘big house’!

Me and Dan sat down on the arm grass and surveyed the scene, probably unchanging for decades, with the dancers on one side and us ‘others’ across the divide of the Ha ha. At the end of the dance the dancers and musicians turned and bowed towards us which was a nice touch I thought! The origins of this tradition are obscured and still debated and there is little if no
evidence to really prove its origins. The historian Ronald Hutton,
says that the dance is a true ‘original’ yet he adds that once the antlers are removed it is instantly recognisable as a traditional north Midland hobby horse dance.

As we made our way back to the car there was a group of elderly people who had been watching the spectacle, wrapped up warm in their wheelchairs against the brisk wind. One elderly lady reached out to Dan, seemed almost desperate to stroke him. She didn’t seem able to speak but his intuition took him to her and for a few moments she stroked him smiling, maybe remembering an old friend.

After we had left the dancers would continue through other villages, back to Abbots Bromley to the stalls selling cakes, books and home made jam, to the Morris Sides with drinking and merry- making to be done until the horns were taken back to the church at 8 o’clock for the ancient service of Compline, the Night Prayer. And so the dance is done, for another year… 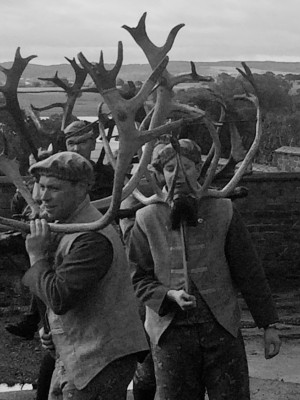 Ronald Hutton: the Stations of the Sun. 1996