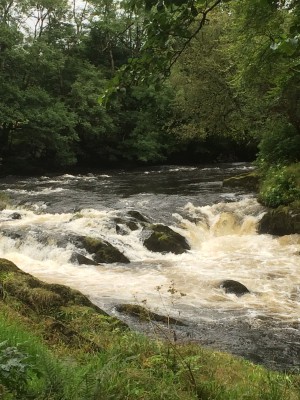 It was our new Barefoot caravan, Mollie’s, maiden voyage and we had driven through pouring rain up into the wet Welsh mountains of Snowdonia to find that the pitch we thought had been reserved for us was no longer available! It was getting dark and folk were coming down off the
mountains due to the awful weather and we were feeling dejected and
wet. Then the blessed sat-nav took us down a blind lane and I had to
reverse Chris out onto a major main lane in a downpour where the
average speed seemed to be 150 mph!!! So we were about to reluctantly
drive all the way home when we remembered the Brigands Inn at
Mallwyd. We knew the landlord and so thought we could call in and
have something to eat and ask advise regarding any nearby sites we
could stay. The landlord, Kev, gracious as ever, not only invited us
to put up in his car park but gave us a drink on the house and the
very dejected Dan a few dog treats! Things were looking up!

After this warm welcome, a pint of cider and the prospect of a hot meal I was even more happy to find out that our host also had an interest in local folklore and regaled us with tales of King Arthur, the Bandits of Maddwych and Saint Tydecho. Sweet dream are made of this!

After a snug night in Mollie we set off to see the church of St Tydecho, just round the corner from the Brigands Inn. This church is old. It has been here from at least 1254 yet it is rumoured that the original church was built
somewhere else, in AD 520, on the nearby mountain but we do not know
where and there is no evidence of this. St Tydecho is said to have
come from Armorica, modern Brittany, (or Cornwall) to Wales. We know
very little about him except that he landed on the Merioneth coast
and his centre was around Mawddwy. There is a well in the mountains
dedicated to Saint Tydecho. Maybe the ruins of his original church
are close by under the sheep crop grasses and boulders? 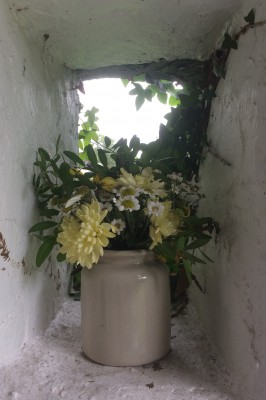 There is a curious story connected to the saint as told by Mary Corbett Harris, who lived in this area. It was believed locally that the church had a connection with nature as the saint had ‘power’ over wild animals. He lived
the life of a hermit, wearing a hair shirt and sleeping rough, taking
only what he needed to survive from the land:

“But even though he lived such a simple life he incurred the wrath of Maelgwyn Gwynedd, a local chieftain, who to make things difficult for the saint sent him a stud of valuable white horses to look after. Tydecho turned them loose among the mountains where they ran wild and ungroomed. When Maelgwyn wanted them returned they were in such poor condition he was very angry with the saint and as a reprisal he seized Tydecho’s oxen, so
that he could no not plough and harrow his land.

The saint must have been in despair, but some stags appeared and allowed themselves to be yoked to the plough, while out of the forest came a wolf, so tame he could be used to draw the harrow.”

Accordingly to this story, it seems that St Tydecho never settled in North Wales and returned eventually to Brittany. He founded two other churches at Llanymawddwy and the one at Mallwyd. The church at Mallwyd has not
been heavily restored and retains many interesting features, not
least a list in the hallway advising locals who they can and cannot
marry (due to ‘family ties’). 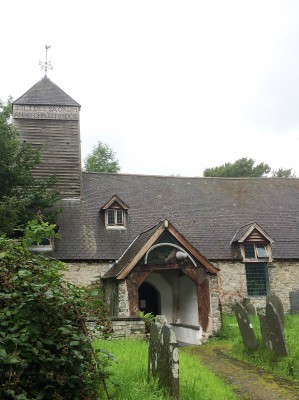 Hanging above the porch is the tusk of a pre historic mammal, probably a mammoth, and a ball joint, both found nearby in the River Dovey (see above picture). The church has been built on a raised mound and there are many elderly yew trees. Certainly in England, sprigs of yew were lain in coffins and graves at funerals. I do not know if this was the case also in
Wales but certainly yews have been significant for may hundreds if
not thousands of years! The scholar and biblical translator, John
Davies was appointed rector at Mallwyd in 1604 and was buried there
on his death in 1644.

We had been advised to walk from the church along the river Dovey to the old mill a couple of miles away where there was a cafe. An old lane criss -crossed the river which was high and fast after the rains, meandering rapidly towards the estuary. Sea Trout and Salmon can be seen here but I
think the river was just two high and we were unlucky. But we were
not alone. Dippers and Yellow wagtails hopped upon the wet boulders
skirting the water looking for food and Kites and Ravens soared
dramatically overhead. Despite the showers it was humid and misty and
Dan was happy to trot alongside through lanes lined with Ash and Oak
and Hazel and ample evidence of ancient coppicing and stone work. The
few cottages we passed seemed to be holiday lets now. This land is
all privately owned and part of a massive, industrial shoot. The
young pheasants skittered away from our approach and game keepers
were busy priming their targets for the blood sport enthusiasts that
would shortly mar this beautiful landscape with their noise and
slaughter.

We reached the mill and were refreshed with hot tea and Bara brith
while considering the story of the Bandits of Mawddwy that Kev had
told us the previous evening. Inspired by the story he told I
discovered more when I consulted ‘the books’ at home: this is the
story of the Red Bandits of Dinas Mawddwy:

There were once bandits living in the mountains above Dinas Mawddwy,
robbers with bright red hair! They stole the villagers’ cattle and
belongings and the locals kept scythes up their chimneys to use as
protection, such was their violence. On Christmas eve in 1554 many of
the bandits were captured by the local sheriff to be tried and
sentenced for their crimes. Two were young sons of a local woman
called Lowri, who begged for their release. The sheriff refused and
in anger she bared her neck and cried: ‘these yellow breasts have
given suck to those who shall wash their hands in your blood!’. He
did not release the boys and the bandits were all executed at
Collfryn ( the hill of loss) and buried near the town of Mallwyd.

Now the following year her curse came true. Sheriff was found dead on the
highway with 30 arrows in his body. Subsequently, every male between
eight and eighty were rounded up and either hanged or transported.
Lowri was also arrested but claimed she was pregnant and escaped
execution.

To this days any child born locally is said to be descended from these
bandits and there are rumours that there are still a few scythes up a
few chimneys!

The pub we had parked in was names after the event being called The
Brigand Inn.

Now I have driven along the busy main road here many times, passing the mill yet unaware of the river and the beautiful landscape quietly existing alongside. We were surprised to find an old 17th century pack horse bridge crossing the Dovey, no longer used. We had never seen this before and it reinforced to me how important it is to slow down, get out of our cars and look around, investigated and enjoy the land and it’s stories! As you can see it was beautiful and very evocative. Is funny how things can work out. If we had followed our original plan we would have missed this beautiful
bridge, the tumbling river, the bandits and a mammal tusk, all in 24
hours. Oh, and apparently there is a pilgrim path up in the mountains
so I am sure I will be back…! 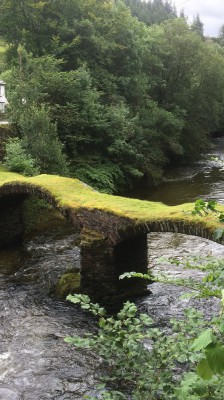