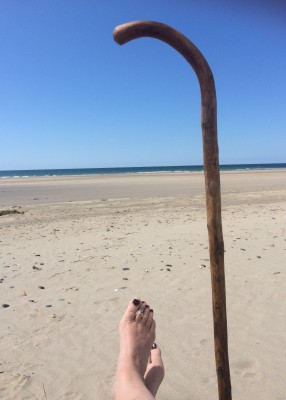 Many of us have a ‘go to place’ and one of ours is the lovely beach just north of Aberdovey, overlooking the lost Cantre r Gwaelod, the drowned lowland hundred of Cardigan Bay. This huge expanse of land was lost long ago swallowed up by a deluge according to legend and song.

As you can see, I have shed the boot and crutch for a stylish stick. We spent a few pleasant hours looking at the horizon, imaging the lost lands known to exist beneath the calm blue sea. Recently storms, including this years Storm Hannah, have revealed stumps of oak, willow and hazel, remnants of ancient forests over 3000 years old, at least. Perhaps this is how the stories began but they are not unique to this part of Wales and similar tales of submerged towns and coastlines are known as far away at Brittany. Some say it all started with Atlantis…

This is a part of the coastline I never tire of, rich in legend and history – just up the road is Harlech Castle where Branwen set sail for Ireland with only a sad marriage to look forward to and a broken heart. The giant Bran waded across this sea to confront Matholwych, king of Ireland. The kings’ swineherds went to him with ‘extraordinary news’ that they had seen a forest on the sea alongside a moving mountain which, of course, was the giant! On the hills behind the bay Arthur fought the afanc, a hideous beast that lived in Llyn Barfog whose depths are said to be fathomless. Arthur’s horse Llamrai smote the afanc with her hooves and there is an imprint of one of them in a rock near the lake.

After a hard afternoon on the beach with guacamole and ginger beer, musing on the meanings of life, the many transitions and changes that are rung each day, the miracle of bones breaking and healing, while Dan the collie watched for giants striding across the bay it was time for an ice cream and a visit to the famous Bell of Aberdovey. It is said that the bells of the Cantre r Gwaelod can sometimes be heard ringing beneath the water if you stand on Aberdovey beach. This has inspired song and verse and last century a huge bronze bell was hung under the pier which rings at hide tide, budged by the waves….spooky. But today was all smiles and sunshine as we headed home up the beautiful Dyfi estuary towards home