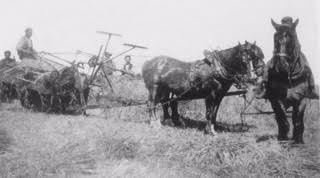 Once a huge event in rural communities, this was the culmination of the farming year with people coming together to bring in the barley, rye and other crops. When all was done they were rewarded for their labour with food and drink, an ancient custom that later survived in the harvest feast provided by the farmer.

With much of the work complete, people were in high spirits, celebrating with Lammas fairs and games, wakes and midsummer fires. These fires, writes the historian Ronald Hutton, were derived from an important pre-Christian ritual, perhaps related to purification and protection but likely to older traditions of sun worship, exemplified by accounts of rolling burning wheels down hills during midsummer, the wheel being the most widespread symbol of the sun in prehistoric Europe. By the nineteenth-century many of these traditions were being left behind or tamed down by the gentry and church which adopted Reverent Hawker’s idea of a harvest ‘festival’ to replace the more riotous harvest feast of earlier days. These became much more sedate affairs but some of the songs have survived or were rescued by song collectors and folklorists, albeit often altered due to ‘unsuitable’ content or words! One of the best known songs is John Barleycorn, the personification of the barley crop and its journey from seed to death and conversion to ale and bread. The earliest written version is from the sixteenth-century.

The Shropshire farm worker and singer, Fred Jordan, is still known for his version of John Barleycorn. Forty odd years ago, he use to sing in the pub up the road from Moon Brook Cottage. Fred became well known amongst the British folk revival crowd, recorded by Alan Lomax and later, the record companies, singing the old songs he had learnt from the elders and local gypsies of the Welsh Marches. Fred remained unchanged by his fame, growing veg and singing locally until bad health forced into a nursing home on the east side of The Hill where he died in 2002. Fred wouldn’t recognise the area now. Machines do almost all of the farm work round here; gone are the singing sessions in the pubs and the lean, skilled farm workers have been replaced by giant tractors that tear up the lanes and hedges. I never meet a farm worker when out and about, walking the land like I did when a child. The pub pipes music and serves food mainly. It seems John Barleycorn take second place round here today.

My husband is a woodsman and works on The Hill. One day he found a scythe hanging on a branch in a sycamore tree, rotten and full of woodworm. What was its story? Why was it hung in that tree and left there? He bought it home and I desperately try to stop it from crumbling away….a bit like I do with the memories of the past. I glean through memories and remnants of history, searching for hints of true tradition through glimpses of captured moments like the old scythe found in the tree.

The old harvests are captured in the many dusty photographs of the harvest working parties, taken in the nineteenth and twentieth-centuries: grey faced men and women staring directly at the camera, clutching sheaves and scythes, waiting to get on. Many of us have ancestors like these, farm workers or helpful neighbours, farmers or land owners. My mother’s family were farm workers who moved around the Welsh Marches following the hop and cereal harvests, chasing the work, up and down the old roads that connected farm with village. They were part of a network of an itinerant work force made up of gypsies, travellers, farm workers and local people, sharing (or competing ) for the work, all coming together when they bought the harvest home.

What a time that must have been! The singing, the celebrations, the chance to mix with different people, people you knew but didn’t get chance to chat with often, parents and neighbours keeping an eye on the younger ones….the urgency to get the crops in, oats, wheat, barley and rye. Curiously, there are few records of harvest traditions before the sixteenth-century and we are left with later examples of traditions now rare : ‘crying the mare’, ‘cutting the neck’, ‘kern babies and ‘crying largesse’. Some of their old meanings are now lost, forgotten or have changed over time. When oral traditions were disappearing antiquarians and later folklorists recorded their names before they were forever gone, fixing them in print but unsure of their meanings.

‘Cutting the neck’ signalled the end of the reaping when the men cut down the last sheaf and’ crying the mare’ signalled the end of the harvest. ‘Crying’, ‘calling’ or ‘shouting the mare’, wrote the nineteenth-century Shropshire folklorist, Charlotte Burne, was a ceremony performed by the harvest workers to let other farms know that they had completed the harvest. It involved a lot of showing off and prowess, the men taunting the farms lagging behind. They would send their ‘mare’, the last sheaf, to any farm that had not yet finished and they to the next and so on. The last to finish would keep the ‘mare’ the whole winter. These now rare traditions can still be found in tucked away places such as Padstow, Cornwall, where each summer a hymn is sung and a prayer of thanksgiving is said in Cornish before the ‘cutting of the neck’.

Past antiquarians figured that such traditions were derived from an ancient belief that the spirit of the corn field was contained within this last sheaf, driven from the field as the crop was harvested. As such, it was given a name which varies accorded to location: mare in Herefordshire, Shropshire, Wales, Hertfordshire; hare in Galloway; frog in Worcestershire.

In parts of Shropshire it called ‘cutting the gander’s neck off’, the neck usually being twenty ears of corn although Thomas Wilkinson of Much Wenlock (b. 1796) spoke of one ear only. The ears would be knotted together in the middle of the field when the rest had been cut. The men stood ten to twenty paces distant and threw their sickles and the ‘best mon’ won! Then, there was a great shout and all went off to the feast! On the Isle of Man the last sheaf was bound with ribbons and taken to the nearest hill where the Queen of the Mheilla, the Harvest Home, held it over her head to loud cheering.

These corn dollies were made by my grandfather over fifty years ago. They are tiny, about the size of your little finger. Corn dollies became a rather refined tradition having many different styles and regional variations such as kern-babies, ivy girls or mell dolls. Their origins are rather vague, but they are likely derived from the last sheaf tradition, a trophy or token of the harvest, which in many areas would be decorated, sometimes in a child’s frock and ribbon, and carried by the ‘harvest queen’, to signal the end of harvest. Making corn dollies is now on the red list for ‘heritage crafts’ which means is it a skill in danger of dying out. Fortunately there are some innovative and exciting new artisans breathing new life into the tradition such as Victoria Musson. This is a ‘dolly’ I made on one of Victoria’s workshops at Blue Ginger Gallery, near Malvern last year. See her website below for stunning examples of her work.

Some areas do not have records of last sheaf customs but do have a tradition of Harvest Home when the cart carrying the last load home would be decorated with ribbons and flowers, corn and, in East Anglia, the ‘Harvest Lord’ on the top. The horses would be dressed as finely as the cart and the whole show was accompanied with singing and music.

The origins of the harvest lord are unclear. The folklorist, George Ewart Evans wrote that in East Anglia, the lord was usually the foreman, elected by the men for the term of the harvest. His role was to negotiate with the farmer, terms and conditions for the workers. He also was responsible for collecting ‘largesse’. In East Anglia, this was known as ‘hollaring largese’ and in Suffolk they called ‘largesse or revolution!’ at folk passing by the harvest fields. It was a means of extorting money from people to put towards the harvest supper! As well as a harvest lord, in some areas there was also a ‘lady’ of the harvest, actually a man and second in command who would take the ‘lord’s’ place, if he was absent, at the head of the line of reapers.

The grace and skill of the workers is captured on this rare 1915 film:

Although the customs surrounding the harvest, as we known them today, are not known to have an ancient pedigree, they were confidently described as such by the nineteenth-century folklorists and this interpretation remains popular today. Modern theorists conclude that they are likely to be a celebration of the hard work. It doesn’t matter. Folklore, by definition, should be a changing medium, shaped by the people and answering a need of the people. There is no time here to debate the complexities of the evolution of this tradition but there is a lot to be said for people coming together, now more than ever. I think, we are worse off for the demise of the gatherings and joint labour, especially for harvest, a tradition which goes back hundreds, if not thousands of years.